Motorola, Inc. (/ˌmoʊtəˈroʊlə/[2]) was an American multinational telecommunications company founded on September 25, 1928, based in Schaumburg, Illinois. After having lost $4.3 billion from 2007 to 2009, the company demerged into two independent public companies, This Company and Motorola Solutions on January 4, 2011.[3] Motorola Inc. was renamed Motorola Solutions and is legally the direct successor to the original company after the demerger from Motorola Mobility.[4][5] Motorola Mobility was sold to Google in 2012, and acquired by Chinese company Lenovo in 2014.[6]

This company’s wireless telephone handset division was a pioneer in cellular telephones. Also known as the Personal Communication Sector (PCS) prior to 2004, it pioneered the “mobile phone” with DynaTAC, “flip phone” with the MicroTAC, as well as the “clam phone” with the StarTAC in the 1990s. It had staged a resurgence by the 2000s with the Razr, but lost market share in the second half of that decade. Later it focused on smartphones using Google‘s open-source Android mobile operating system. The first phone to use the newest version of Google’s open-source OS, Android 2.0, was released on November 2, 2009, as the Motorola Droid (the GSM version launched a month later, in Europe, as the Motorola Milestone).

The handset division (along with cable set-top boxes and cable modems divisions, which would later be sold to Arris Group) was later spun off into the independent Motorola Mobility. On May 22, 2012, Google CEO Larry Page announced that Google had closed on its deal to acquire this company.[8] On January 29, 2014, Page announced that, pending closure of the deal, Motorola Mobility would be acquired by Hong Kong-based technology company Lenovo for US$2.91 billion (subject to certain adjustments).[9] On October 30, 2014, Lenovo finalized its purchase of this company from Google.[10] 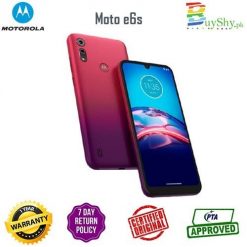 ₨15,500.0
Select options
Sold By: Online Shopping in Pakistan with Cash on delivery all over Pakistan | Buy Online Products